Chisholm Larsson Gallery In the News! 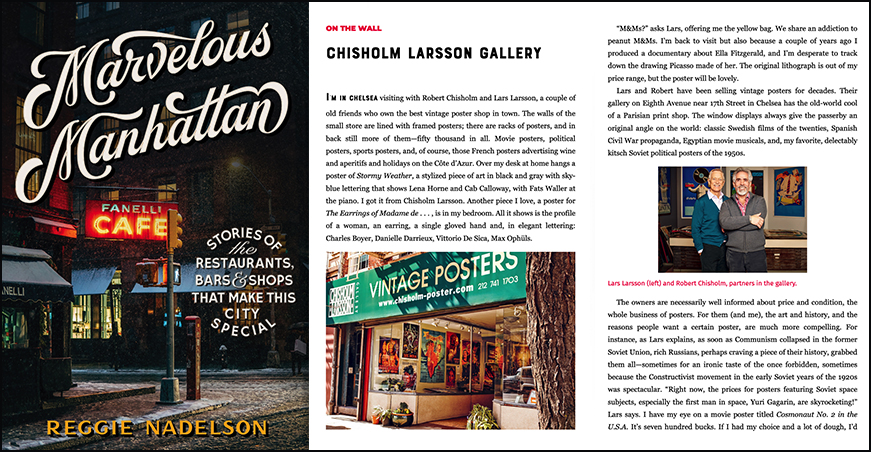 On The Wall: Chisholm Gallery

Stories of the Restaurants, Bars, and Shops That Make This City Special

“I'M IN CHELSEA visiting with Robert Chisholm and Lars Larsson, a couple of old friends who own the best vintage poster shop in town. The walls of the small store are lined with framed posters; there are racks of posters, and in back still more of them-fifty thousand in all. Movie posters, political posters, sports posters, and, of course, those French posters advertising wine and aperitifs and holidays on the Cote d'Azur. Over my desk at home hangs a poster of Stormy Weather, a stylized piece of art in black and gray with sky-blue lettering that shows Lena Horne and Cab Calloway, with Fats Waller at the piano. I got it from Chisholm Larsson. Another piece I love, a poster for The Earrings of Madame de ... , is in my bedroom. All it shows is the profile of a woman, an earring, a single gloved hand and, in elegant lettering: Charles Boyer, Danielle Darrieux, Vittorio De Sica, Max Ophiils.

"M&Ms?" asks Lars, offering me the yellow bag. We share an addiction to peanut M&Ms. I'm back to visit but also because a couple of years ago I produced a documentary about Ella Fitzgerald, and I'm desperate to track down the drawing Picasso made of her. The original lithograph is out of my price range, but the poster will be lovely.

Lars and Robert have been selling vintage posters for decades. Their gallery on Eighth Avenue near 17th Street in Chelsea has the old-world cool of a Parisian print shop. The window displays always give the passerby an original angle on the world: classic Swedish films of the twenties, Spanish Civil War propaganda, Egyptian movie musicals, and, my favorite, delectably kitsch Soviet political posters of the 1950s...”

YOU CAN READ MORE by purchasing Reggie Nadleson's book at various sellers: goodreads.com 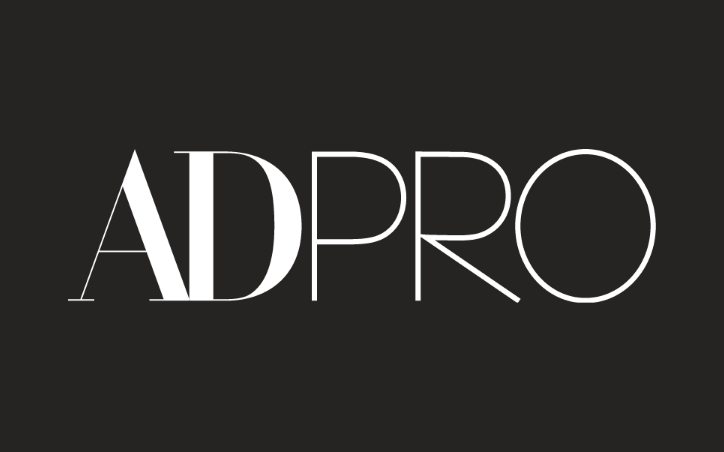 “Throughout the talk, Shellhammer discussed many of his favorite products and shopping destinations, but a few unexpected favorites stood out. Chisholm Larsson, a poster gallery in New York, is his go-to spot for vintage posters of all kinds, he shared...” 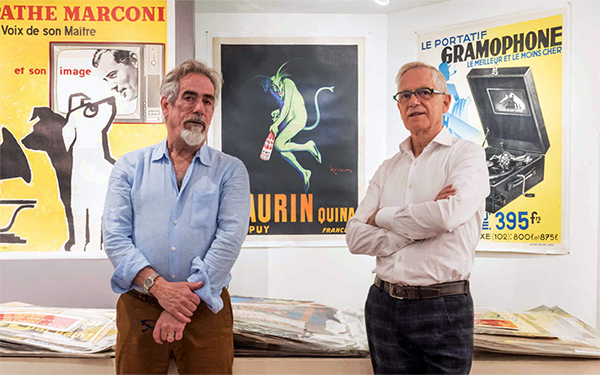 Financial Times : How to Spend It

With its eclectic inventory, this New York seller of vintage posters caters to cineastes, graphic-art lovers and the odd feline fanatic

“ "It would sell for upwards of $800,000 – if you could find it," says Robert Chisholm. He is referring to the original poster for Fritz Lang’s 1927 sci-fi drama Metropolis, a "coming attraction" poster of the variety that was pasted up in cinemas, then most often thrown away. It is precisely this kind of engaging graphic ephemera that is plied by New York’s Chisholm Larsson Gallery, whose stock includes fin de siècle wine and spirits posters, richly coloured Spanish bullfighting adverts from the 1930s and star-spangled 1940s enlistment-drive imagery – all intended to be seen for a short time, but here given lasting relevance...” 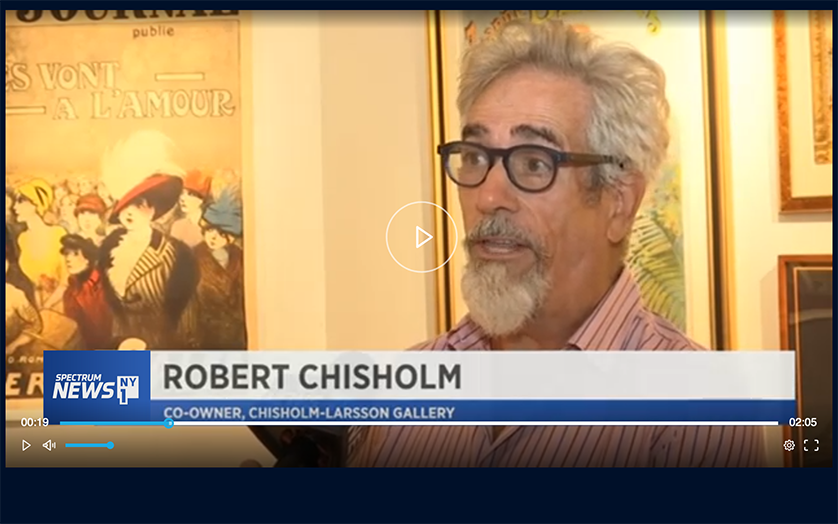 “Vintage posters have long been a staple of college dorm rooms everywhere. Now, they're also an affordable way to add some culture and flair to your home decor. The Chisholm-Larsson Gallery in Chelsea has more than 50,000 vintage posters for sale, from both here in the city and around the world. Many are old movie posters, political signs, and advertisements going back as far as the late 19th century. The gallery says it's the disposable nature of posters that makes them interesting to see years later...” 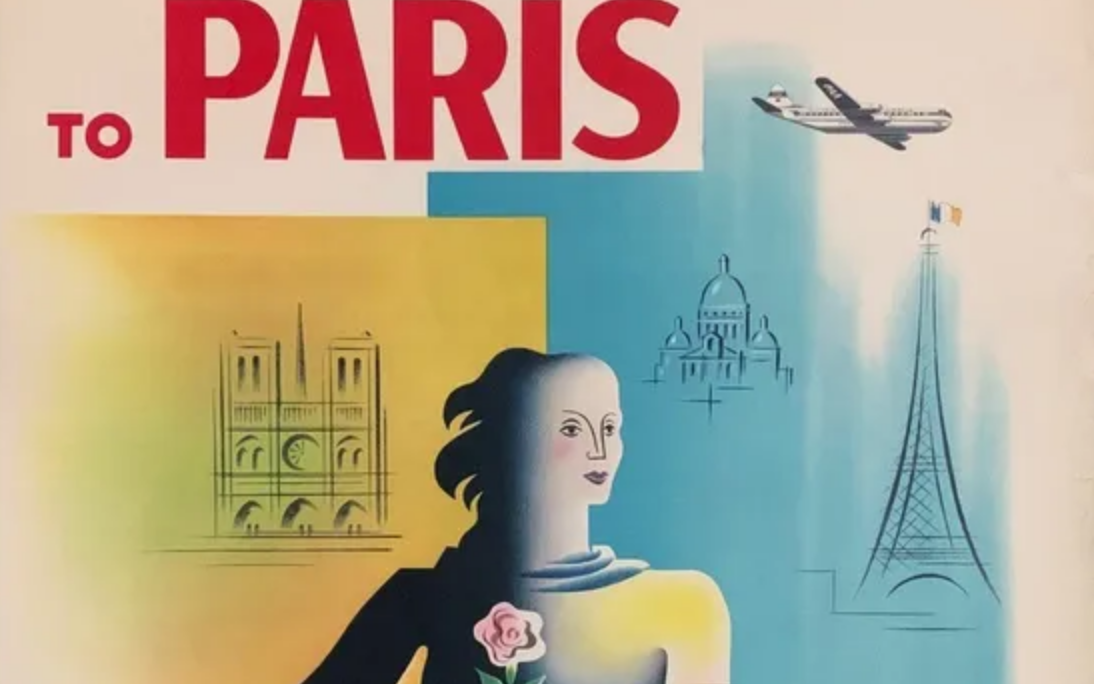 “Few things hearken back to the “Golden Age” of travel like a good poster. Aviation enthusiasts will get an extra jolt from one depicting an airline that’s no longer flying. One good place to look is the Chisholm Larsson Gallery in New York City’s Chelsea neighborhood. If you can't make it in person, the gallery’s website includes online browsing and purchase options, including this 1950s-era Pan Am poster touting Paris ($800). All works are originals and not reproductions.” 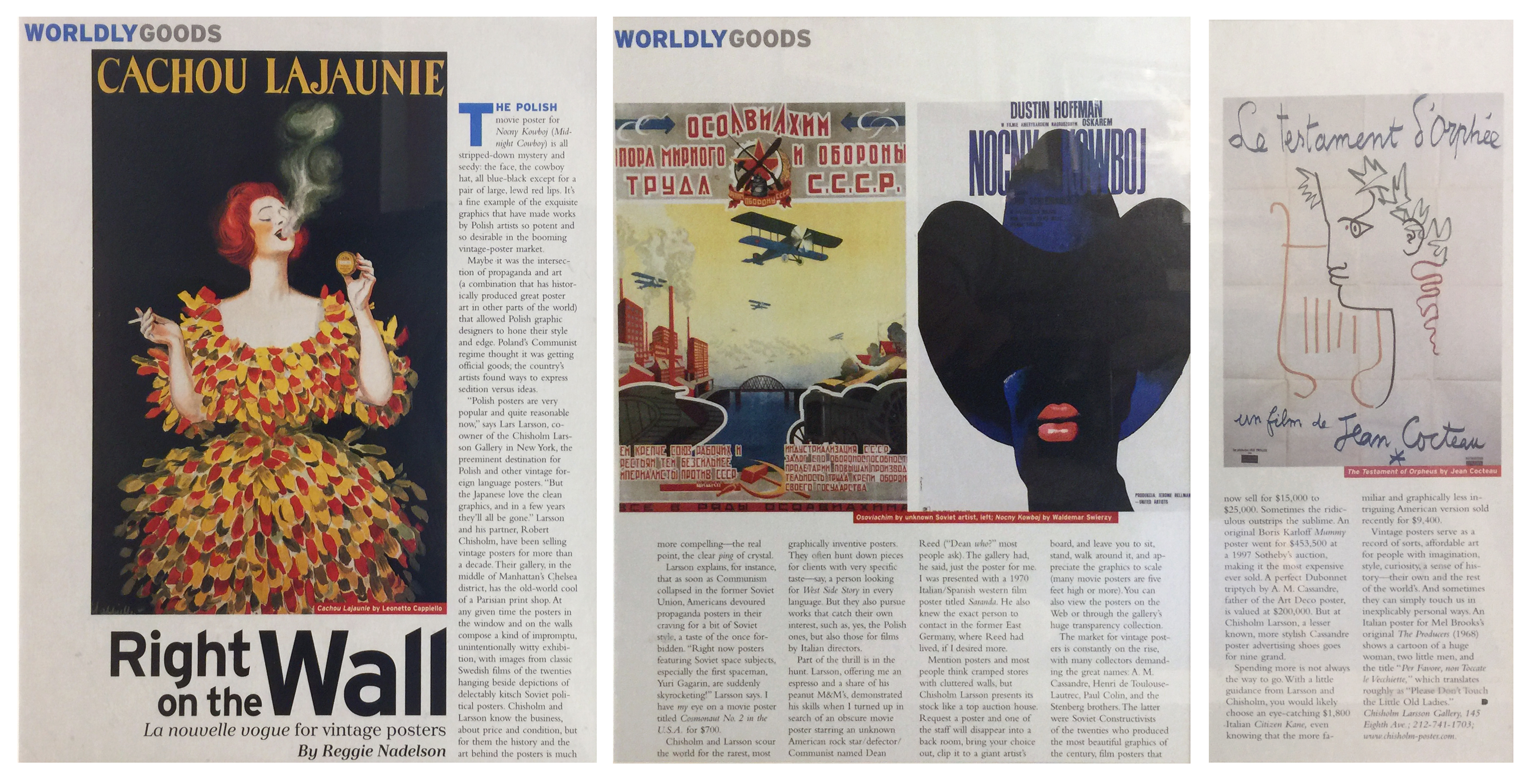 Right on the Wall

“...Mention posters and most people think cramped stores with cluttered walls, but Chisholm Larsson presents its stock like a top auction house. Request a poster and one of the staff will disappear into a back room, bring your choice out, clip it to a giant artist's board, and leave you to sit, stand, walk around it, and appreciate the graphics to scale (many movie posters are five feet high or more). You can also view the posters on the Web or through the gallery's huge transparency collection...” 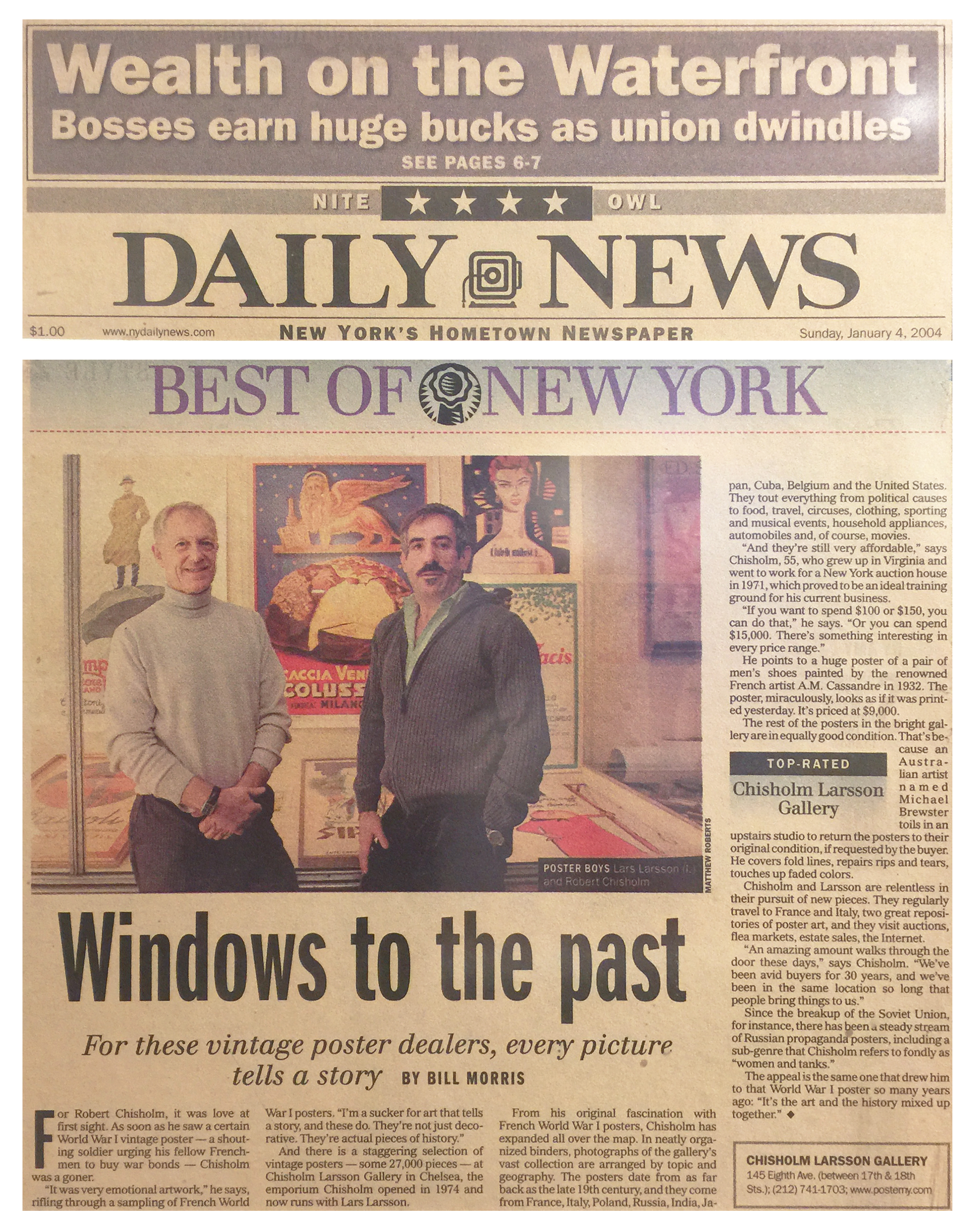 Windows to the Past

For these vintage poster dealers, every picture tells a story

“For Robert Chisholm, it was love at first sight. As soon as he saw a certain World War I vintage poster -a shouting soldier urging his fellow Frenchmen to buy war bonds - Chisholm was a goner. War I posters.

"It was very emotional artwork," he says, rifling through a sampling of French World War I posters. "I'm a sucker for art that tells a story, and these do. They're not just decorative. They're actual pieces of history."

And there is a staggering selection of vintage posters -- some 27,000 pieces -- at Chisholm Larsson Gallery in Chelsea, the emporium Chisholm opened in 1974 and now runs with Lars Larsson.

From his original fascination with French World War I posters, Chisholm has expanded all over the map. In neatly organized binders, photographs of the gallery's vast collection are arranged by topic and geography. The posters date from as far back as the late 19th century, and they come from France, Italy, Poland, Russia, India, Japan, Cuba, Belgium and the United States.

They tout everything from political causes to food, travel, circuses, clothing, sporting and musical events, household appliances,automobiles and, of course, movies.

"And they're still very affordable," says Chisholm, 55, who grew up in Virginia and went to work for a New York auction house in 1971, which proved to be an ideal training ground for his current business.

He points to a huge poster of a pair of men's shoes painted by the renowned French artist A.M. Cassandre in 1932. The poster, miraculously, looks as if it was printed yesterday. It's priced at $9,000.

The rest of the posters in the bright gallery are in equally good condition. That's be-cause an Australian artist named Michael Brewster toils in an upstairs studio to return the posters to their original condition, if requested by the buyer. He covers fold lines, repairs rips and tears, touches up faded colors.

Chisholm and Larsson are relentless in their pursuit of new pieces. They regularly travel to France and Italy, two great repositories of poster art, and they visit auctions, flea markets, estate sales, the Internet.

"An amazing amount walks through the door these days." says Chisholm. "We've been avid buyers for 30 years, and we've been in the same location so long that people bring things to us."

Since the breakup of the Soviet Union, for instance, there has been a steady stream of Russian propaganda posters, including a sub-genre that Chisholm refers to fondly as "women and tanks."

The appeal is the same one that drew him to that World War I poster so many years ago: "It's the art and the history mixed up together" ”